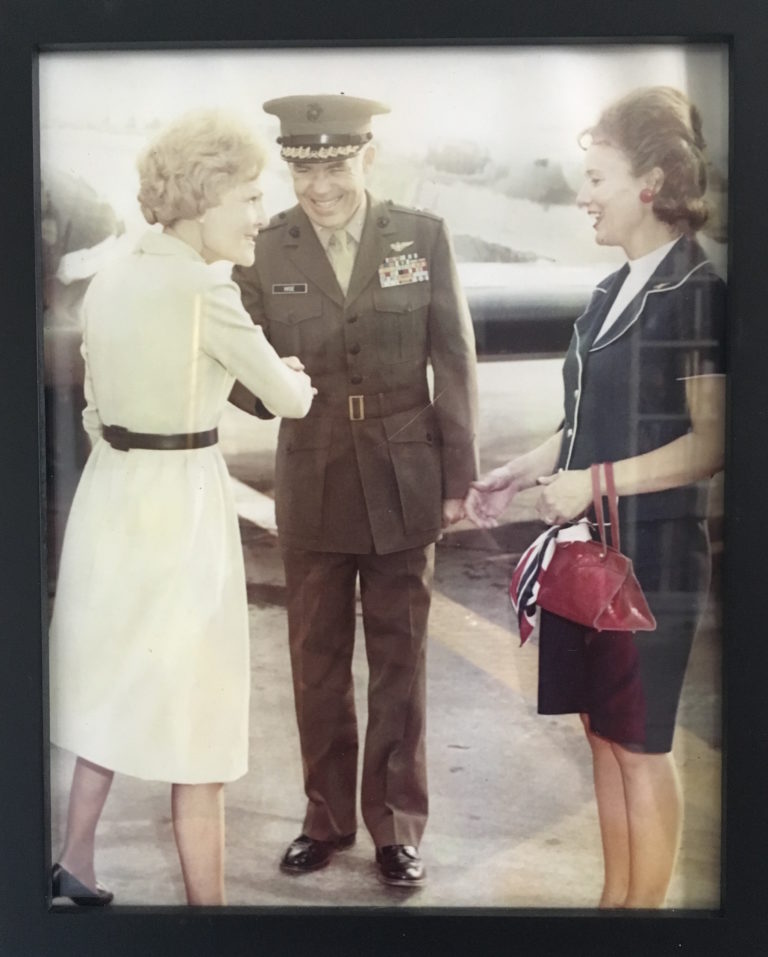 THE GYPSY LIFE OF A MILITARY WIFE

This article originally appeared in the 2017 winter edition of the Lubbock Senior Link magazine.

In memory of Dorris Kirk Faver.

THE GYPSY LIFE OF A MILITARY WIFE

It is said that behind every great man is a great woman. If true, one can only imagine the kind of women you might find behind United States Marine Corps Brigadier General Henry W. Hise and United States Air Force Major General Dudley E. Faver. These remarkable women are Fran Hise and Dorris Faver, though after visiting with them it seems inadequate to say they were the women behind the men.

Mary Frances “Fran” Halcum was born in an Alabama coal-mining camp in 1925. At ten years of age, her father’s occupation required the family move to Birmingham, where Fran spent the remainder of her childhood. She was 18 years old and attending a friend’s wedding when she met the handsome man that would become her husband. Known as “Bill” in his hometown of Shamrock, Texas, he lovingly became known as “Hank” to wife Fran.

Over General Hise’s 30-year military career, the couple faced five combat tours in three wars, including World War II, Vietnam, and Korea. They had six children between 1945 and 1962 and lived in 20–25 different places, too many to track the exact number or sequence of deployments. When asked about this gypsy lifestyle, Fran says, “When you’re young, I look back on it, and I think, how did I ever do that? But you did, and you do what you have to do. Everything’s not always going to be perfect, that’s just all there is to it.”

Fran was carrying their fifth child when General Hise left for a 15-month tour in Osaka, Japan. “I was pregnant when he left, and the baby was walking and talking when he got back. She had never heard a man’s voice before, and it scared her.” Fran admits it was challenging living alone with her children, but believes it built a stronger family unit because they were in it together. Sometimes being ‘in it’ meant moving and the money running out before the paycheck found them. “That only happened one time, and I still remember it. I was ready to kill him when he got home.” Today, Fran confesses that when she makes the occasional luxury purchase, she tells herself, “Hank would want me to have this,” and laughs with a smile that reaches her eyes.

Fran’s apartment wall at Carillon LifeCare Community holds photos with dignitaries and celebrities alike, including President Lyndon B. Johnson and Henry Kissinger. A candid shot shows Fran dancing with Lawrence Welk while her husband watches and leads the band in the background. When asked about the photo of her husband with President Richard Nixon, Fran tells of their time spent at Air Station El Toro, located near Irvine, California. The Nixons purchased a house on the West coast, and El Toro was the nearest government field to land an airplane. “One day Hank came in and said, ‘We are going to start having the President.’ I said, ‘The President of what?’ He said, “Of the United States!”

General Hise passed away in 2010 and is buried in Arlington National Cemetery. Fran deeply misses his companionship and remembers Hank as being interested in everything, not living a boring day in his life. “My husband does not fit the way a stereotype general would be. He was kind of a paradox in a lot of ways…he loved philosophy and poetry and was an artist.” In fact, atop the bookshelf is a bust he sculpted of Fran in 1950, and he sculpted all of his six children and eight grandchildren. General Hise’s legacy lives in this artwork, in his service to this great country, and above all, in Fran’s heart. “It was a wonderful life. Of course, I’m biased. He was an exceptional man.”

Dorris Kirk-Maxey was born in 1919 in Lipscomb County, located in the far northeastern corner of the Texas Panhandle. Her parents were pioneers and homesteaded their land in the early 1900s with only two mules and a hand plow. Dorris was the youngest of 10 children, with seven older brothers and two older sisters. She attended high school in Spearman, Texas and earned her degrees from Texas Tech University before joining the faculty there.

In 1965, a friend introduced Dorris to Dudley, who was then serving as Wing Commander at Reese Air Force Base. Of their meeting, Dorris says, “It didn’t … It didn’t take. I wasn’t impressed. Wing Commander at Reese? Big deal!” she laughs. At a dinner party a few weeks later, the persistent friend insisted Dudley walk Dorris home at the end of the night, and something clicked. A whirlwind courtship ensued, and the newlyweds followed military orders to relocate to Washington, then Europe.

“I married the Air Force. And that’s exactly what happened—I married the air force,” Dorris says. “I loved to travel, and we did a lot of that. I loved to fly, and heaven knows we did a lot of that.” Dorris even recalls a desire to become a pilot herself, except she’s been legally blind since childhood. “I couldn’t see, and I wasn’t permitted to pursue flying.” But she could sing beautifully and graced opera stages around the world as a professional vocalist, singing in Europe, Asia, and Africa. The first time General Faver heard her sing was in Turkey. She was performing for a group of people in the same location he had a meeting. “He stopped in the hall and said, ‘Who is that, and what is she doing here?’ He opened the door, and it was me!”

When asked how the General would describe her, Doris pauses to think, and with a smile says, “Ornery.” Those who know her might agree, but she is also strong and driven, even today at 93 years old. And what is most striking about her reflections of this gypsy-like, military life is that it didn’t change the person she was or is. She continued to pursue her musical passions, and in many countries continued her educational work as a counselor with students who wanted to attend college in the states.

After 33 years of honorable service, General Faver retired from active duty. In the summer of 1980, he accepted a lectureship at Texas Tech University, and Dorris found herself back in Texas. Since then, she has become passionately involved in the management of the family company, which includes farming and ranching on the same land her parents claimed so many years ago. The General passed away in 2011, but his story is captured in the Dorris and Dudley Faver Gallery of Flight at the Lubbock Science Spectrum. Dorris adds, “Military life is a good life. I would recommend it to anybody. I would.”

Certainly, Fran Hise and Dorris Faver were not just the women who stood behind great men. Their stories of sacrifice prove they stood side-by-side with their husbands, serving the country hand-in-hand. The battles they fought were not the same kind their husbands would remember, but they are battles worthy of respect and honor, nonetheless.